What is salt?
Not all salt is the same:
How do salt crystals form?
Why are release agents needed for salt?
Where does pink salt get its colour?
Will we ever run out of salt?
Why bread and salt for collection?
New shine for old silver thanks to salt?
Why are tears salty?
What is salt?

Salt isn’t just salt. It is a chemical compound made up of sodium (Na) and chlorine (Cl): sodium chloride (NaCl).

In addition to the origin and method of extraction (rock salt, evaporated salt, sea salt), there are differences in the minerals, purity, the grain and the taste, for example.

Not all salt is the same: 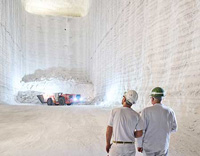 Rock salt is ancient sea salt. In Germany, it was created 250 million years ago when the ancient seas evaporated. Today, ancient salt is mined in Germany from depths between 400 and 750 meters. This treasure from the earth is unrefined and contains naturally acquired minerals.

Evaporated salt is refined salt and is obtained through the evaporation of saturated sea water. This can be achieved using a natural brine source or by using a controlled borehole solution mining procedure.

At SALDORO, we only use natural rock and sea salt.

How do salt crystals form?

Ancient salt is pure salt crystals that were formed under the pressure of overlaid rock masses: so-called halite. The crystals are cube-shaped – sodium chloride in its most beautiful form. The length of the largest salt crystal in the world’s edge measures 1.1 m. You can find an impressive display of halite in the crystal grotto in the Merkers Adventure Mine in Thuringia. Most halite is colourless or white.

Why are release agents needed for salt?

Salt attracts moisture and, in order to ensure that the salt is pourable, we add natural magnesium carbonate as a release agent.

Where does pink salt get its colour? 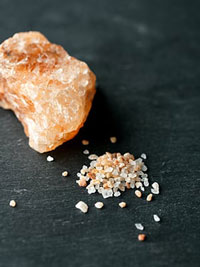 Pink salt, or so-called “Himalayan salt”, does not only come from far away in Pakistan, it is also found in German mines. Traces of iron turn it pink and thus make it a visual highlight, just like the “SALDORO ancient pink salt”. The colour particles in our SALDORO ancient pink salt guarantee its authenticity and organic nature.

Will we ever run out of salt?

No, do not worry! Salt is one of the few sufficiently available raw materials in the world. Not only sea salt but also the ancient salt, which is found underground, will be available for a very long time.

Why bread and salt for collection?

In Germany, about 8.4 million people move house every year. When people move, bread and salt are often given as a symbolic gift. This affectionate gesture is a custom in many countries and takes place on various occasions, such as getting married. But why gift bread and salt? The reason behind this tradition is that there should always be enough bread and salt in the household receiving the gifts. This was not always the case in earlier and poorer times. Today, this gift symbolises a desire for the recipients to enjoy happiness, prosperity and health.

New shine for old silver thanks to salt?

Silver tableware, crockery or jewellery will oxidise over time and turn black. If you do not want to polish it, you can also clean it with salt.

Simply place the silver in a jar with a little tin foil, add a spoonful of cooking salt and hot water. Usually the dark layer of silver will dissolve within a few minutes. If it does not, clean it straight away, remove the silver, rinse off and repeat the process.

This works because thanks to a chemical reaction. The reason the silver becomes tarnished is due to the oxidation of silver with hydrogen sulphide, which is present as particles in the air. The dark patina that emerges is silver sulphide. By means of a chemical reaction (electrolysis) between the silver and aluminium ions, the silver oxidation is virtually reversed – the process is accelerated by the dissolved salt. The silver will shine again and the tin foil goes dark. The reactivity of salt and tin foil is limited; therefore the process may have to be repeated in order to get the desired results.

Why are tears salty?

Quite simply, in order to create tears, moisture must be drawn from the surrounding tissue. In order to do that, the lacrimal gland secretes salt to draw out the liquid.

The story of salt!